Let’s not ever forget September 11, 2001. Instead, let’s look to see what we can learn from what happened and then let’s truly apply the lessons to making ourselves and our world a better place.

September 11, 2015 will represent the 14th anniversary of the horrific terrorist attacks on the World Trade Center in New York and the Pentagon in Virginia. Every year around this time people ask me for my opinion about that day as well as what I think we should remember from the attacks. As a WTC survivor I’m expected to be an expert and to give my views. Ok, but first here is what happened to me.

My story is a bit unique compared to most accounts from people who were in the World Trade Center that day. I happen to be blind and use a guide dog. My guide at the time was named Roselle. She was a very bright Labrador retriever who, on that day, was 42 months old. Roselle’s greatest trait, I think, was her ability to focus on the job at hand and not be distracted by events and activities around her unless she felt they would affect her work.

The job of a guide dog is not to know where its handler wishes to go nor how to get there. The purpose of a guide dog is to “guide” which means that she would follow directions I would give her in order to accomplish a task. We worked as a team in which she would serve as the pilot getting us where we needed to go and I would service the navigator giving her the directions that would keep us on the correct path. Make no mistake, the dogs major job is not to lead nor to be the only conscious force in governing the team’s actions.

I’m spending time telling you about Roselle’s job so that you will understand when I tell you that at 8:45AM on the morning of September 11, 2001 Roselle was asleep under my desk and I was working in my office on the 78th floor of Tower one. Suddenly there was a muffled explosion then the building vibrated and then began to tip in one direction. After about 30 seconds the building stopped and began to move back the other way. I think we moved about 20 feet before we began moving back into position. After the building stopped moving I and a colleague began issuing instructions to get some guests we had in the office to the stairs. After they were gone my colleague, David Frank, and I along with Roselle made our way to the stairs and started down. Eventually we made it to the bottom after meeting with first responders and others along the way.

After exiting Tower one we noticed that Tower two was on fire although we had no idea why. Our path away from the first tower took us to within 100 yards of Tower two. We were that close to it when it collapsed. Remember, each of those towers was over 430 yards tall. We were well within the potential area of the falling building.

Only after the towers collapsed did I learn that we had been the victims of terrorist attacks. Within a day the media heard about my story. I received literally hundreds of requests for interviews as well as request to come and speak at company and school events to tell my story and to talk about what we should learn from the terrorist attacks. Today I travel worldwide as a public speaker talking about that day and the lessons that we can take away from it. I think there are many lessons that we should learn from September 11, 2001. Unfortunately we seem not to want to be quick learners and thus we allow history to repeat itself. Here is what I mean.

1. TEAMWORK. Like it or not the most important concept we should remember from 9/11 is that a relatively small group of people worked as a cohesive team to bring our country and the world to its knees. Teamwork should be important in everything we do. For a while after the attacks we were very united as a country and we had an incredible amount of support from most of the rest of the world. Our politicians, both parties, squandered away the support and have now become so divided that the only thing they’re really good at is arguing and tearing each other down. Successful corporate and military leaders always know the value of good teamwork including urging disagreement and expression of thought to bring out the best solutions. Members of good teams do not attempt to tear each other down but rather they keep the end goal in mind while voicing their views. Once a team, guided by its leader, makes a decision all the members of the team abide by the decision until it becomes necessary to modify the goal or the process of getting to the goal.

There is a lot of truth to the old adage, “United we stand, divided we fall”. No matter what happened 14 years ago we were given an incredible opportunity to come together as a team and move forward. It seems to me that our “leaders” have forgotten this and that they are teaching us bad habits and not good teamwork.

2. A NEW NORMAL. After 9/11 I kept hearing the expression “we have to get back to normal”. The problem is that normal will never be the same after any kind of life-changing event such as 9/11. Whether it is a major change such as the attacks we experienced or it is an event that changes one person’s life we need to remember that while we may not have control over the change we faced we always have control over how we handle the change. At some point we need to move on from change by objectively looking at what happened as well as why the change occurred. We then have to consciously decide how to move forward. I have been back to New York many times since 2001 and still find people who cannot talk about that day. They have become paralyzed emotionally and have not learned how to move on. There really is something to be said for talking about your feelings especially when it comes to some unexpected or dramatic change that takes place in your life. After September 11 there was much discussion and dialogue that had the potential to lead to healing and a stronger country. We got diverted by Enron, MCI WorldCom and other events that while important should of been used as additional building blocks for a foundation of unity.

3. TRUST. If I have learned anything in my life it is that I need to rely on trusting my guide dog and, oh yes, people too. None of us trusts everyone unconditionally. However, if the events of the past several years can be used as any kind of teaching model we should learn to be open to the concept of trust. Our political leaders, for example should be taking time to teach us to gain their trust through actions and deeds not through empty words. Going back to the terrorist team of 9/11, the 19 people who conducted the attacks obviously trusted each other. We have some great examples of trust on the other side including the many stories about Navy seal team six, the Army Rangers and corporate environments that were and are successful. While not everyone liked Steve Jobs for example I suspect that most people in Apple would tell you that they trusted him to lead them. If such were not the case Apple would never have had the successes we have seen.

No matter all the turmoil and conflict we see around us I know that the United States of America is still the greatest country in the world and that we have so much potential to be stronger and more unified. Each of us has to expect more of ourselves and then we can begin to expect more of those around us. Our leaders need to set a better example as a collective group and as individuals. We need to set the bar higher for them and not just chalk everything up to quote politics” and business as usual. In my travels I have seen how many times one individual has made a difference in the lives of many whether or not they ever realized it. I constantly receive letters from people who’ve heard me speak telling me how one comment or another I made help them and made them better.

Let’s not ever forget September 11, 2001. Instead, let’s look to see what we can learn from what happened and then let’s truly apply the lessons to making ourselves and our world a better place.

Michael Hingson, blind since birth, was born in Chicago to sighted parents who believed in raising their son with a can-do attitude.

Michael Hingson’s life changed dramatically on September 11, 2001 when he and his guide dog, Roselle, escaped from the 78th floor of Tower One in the World Trade Center moments before it collapsed. Soon after, Michael and Roselle were thrust into the international limelight where Michael began to share his unique survival story and 9-11 lessons of trust, courage, heroism, and teamwork.

He is the author of the #1 New York Times Best Seller: “Thunder dog –The True Story of a Blind Man, his Guide Dog & the Triumph of Trust” – selling over 2.5 million copies Worldwide. NEW to the presses this year is his 2nd book “Running with Roselle”- Is the first of its kind- A story for our youth shedding light on one of Americas Darkest Days.

Currently Michael lives in Southern California. He is a full time public speaker available to speak to companies, schools and organizations throughout the world.

More information on Mr. Hingson including how to contact him is available on his website at www.michaelhingson.com 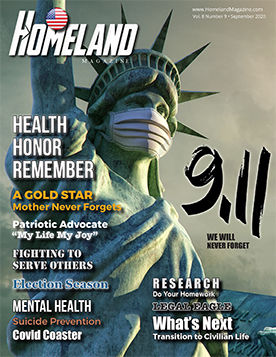