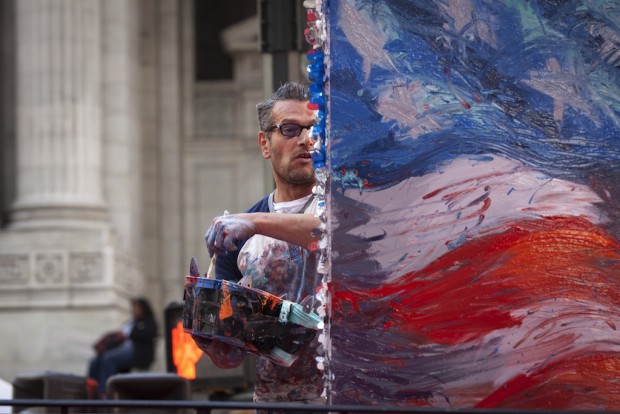 Honoring the rich symbolism of this beautiful country and saluting the valiant efforts of our veterans.

Scott LoBaido is an American artist with over 25 years of painting experience, largely focusing on the intricate tapestry of American culture, freedom, patriotism, service, and nostalgia. The mission of his art is simple; to honor the rich symbolism of this beautiful country and to salute the valiant efforts of our veterans. And to show the extraordinary in the most seemingly ordinary places.

From February to September of this year, nationally-recognized artist Scott LoBaido painted a waving three-dimensional American flag design on a veteran’s post in 49 states.

He drove through all 48 of the continental states and took a ferry to complete Alaska’s piece.

But he chose to wait out Hawaii, the 50th mural, until Dec. 7, in honor of Pearl Harbor Day.

The 50-year-old Grasmere resident and conservative activist doesn’t fly, and since there were no container ships traveling to Hawaii for the holiday deadline, he painted the state’s mural on 25 wood siding panels in Staten Island and shipped them to Hawaii. A team from Home Depot placed the panels on the facade of an American Legion Post.

All told, the patriotic artist’s trip spanned over 24,000 road miles and required 1,100 gallons of paint, 500 paint rollers and 25 pairs of blue jeans.
Lobaido set out on his first national tour in 2006, painting a flag on a rooftop in every state. The concept was designed to show a sign of support for military men and women being deployed or returning from deployment.

“I’ve always had a soft spot for veterans and helping them, and not only raising funds, but celebrating them and thanking them for bringing us the freedom we enjoy,”

A letter from Scott

Throughout my 50 years, people have often said I was born in the wrong era. Long fascinated by post World War II America, glamour girls, the Rat Pack, big band music, and all things classic Americana, I’ve always loved strong cultural symbolism. Time though, especially for an artist, is an interesting thing. Art for us exists in and long past neatly defined eras.

Brushes and strokes can transcend time and wind effortlessly through the past, present, and future.

For me, art is the greatest time traveler. It is also the simplest and most universal of statements – I am here. We are here. And it is our greatest hope to preserve our work for future generations – that will be here.

With my art, I’ve sought to make a difference in the world as a man and as an American. Whether a Boomer, Gen-Xer, or Millennial, it’s easy in modern times to forget the origins of our prosperity and freedom. The wondrous and instant nature of our technology and culture can make it easy to forget how we got here. And so I became fascinated with preserving the symbols of the countless brave Americans who stood, fought, marched, and sacrificed so much for our livelihood. I am no history scholar but I sense in the basics of my being, preserving our past is the truest way to honor our future.

For ten straight months during my last Fifty States Tour, my artwork promoted patriotism without the use of political rhetoric deliberately. As I trekked solo on an incredible grassroots journey, l eagerly soaked in veterans, families, passer-bys and our collective stories mile by mile. By the end of it, I had painted a U.S. flag rooftop mural in every single state. Artistically I left a small token of preserved American symbolism behind, but the veterans I saluted left even more with me. Never once on did we mention the labeling words of Republican or Democrat. It was bigger than labels. It was about “We the People”. It was about pride, honor, and appreciation for all Americans who served our nation. Patriotism is about all of us. And it can’t be hijacked by rhetoric, politicians, differences, or warring ideologies.

The great thing about America is the fact that it can always be better, and our gift is that “we the people” have the freedom to make it better. Anyone who knows me knows I passionately advocate for the First Amendment. I encourage us all to passionately question, protest, express, assemble, and petition – but always, always be grateful that you can.

As Americans, our past and future are intrinsically intertwined. While traveling from state to state and painting American art, some saw a crazy man coloring rooftops in their community, others saw an artist with a singular red, white, and blue obsession. But this simple man is on a mission; greater than myself and past my own era, and the decades before. While sitting in a quiet campsite, with soft Idaho soil caked underneath my boots, I realized who I am: just one of the electricians, in a long line of creative light bearers, connecting one wire to the next, and keeping the lights on.
Get the latest on Scotts work at scottlobaido.com

To commission the artist for original canvas paintings or murals, please contact Scott directly at scott@scottlobaido.com