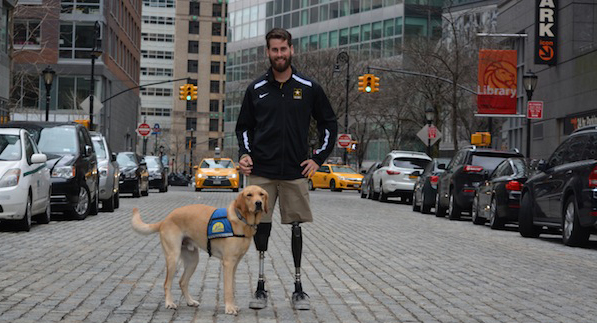 U.S. Army Sergeant Stefan LeRoy was only five months into his deployment to Afghanistan when his platoon’s blocking position was hit by two improvised explosive devices (IEDs). “As I moved to their position to provide aid, my first thoughts were, ‘I’m going to go help them. I know there are more IEDs, but that’s what you do,’” says Stefan. “You do the right thing.”

While carrying one of his injured platoon members to the medevac helicopter, Stefan stepped on another IED. “I lost my legs in Afghanistan while trying to carry others to safety. Now it is their memory, their courage, their sacrifice that carries me forward.”

During recovery, Stefan had a desire — even though he didn’t have his legs — to run, bike and go fast again. “I wanted to see progress,” explains Stefan. While in rehabilitation, Stefan was referred to Canine Companions for Independence. “They told me what a well-trained service dog could help me with. I was most attracted to Canine Companions because their dogs were so well trained and socialized.”

After attending a two-week Team Training class to learn how to work alongside an assistance dog, Stefan was matched with Service Dog Knoxville. Canine Companions professional instructors matched the two based on Stefan’s active lifestyle and needs and Knoxville’s temperament and drive to work.

Knoxville, a yellow Lab/Golden Retriever, spent 18 months with a volunteer puppy raiser before returning to Canine Companions for 6 months of professional training where he learned tasks that would prove crucial to enhancing independence for someone like Stefan. Knoxville can retrieve items as thin as a credit card, pick up dropped prostheses, turn on and off lights, and open doors.

“Today, I use prosthetics and have Canine Companions Service Dog Knoxville (Knox) to help me move forward and go further.” Stefan participates in adaptive sporting and running and Knox is always there on the sidelines ready to help retrieve equipment and provide loving support after a long, hard workout. Stefan’s desire to run and bike hasn’t diminished. With Knox by his side, Stefan participated in the 2016 Invictus Games.

“I’m pretty stable when I’m walking or moving, but bending over is extremely difficult without losing my balance,” explains Stefan. “Knoxville is exactly what I was looking for: a legitimate service dog who was bred and raised to handle everything in stride. He knows over 40 commands to help make life easier. In those situations when I don’t feel comfortable with my disability, Knox is there to make me feel more
comfortable.”

Knox is there to help Stefan pick up items he drops so he doesn’t fall over. If Stefan is in bed without his prosthetics on, Knoxville will help by turning on or off lights. Knoxville can even bring Stefan’s wheelchair to his bedside by tugging a special strap attached to the wheelchair. “Knox helps with everyday tasks that enable me to be more independent,” says Stefan.

Although it takes two years to prepare each assistance dog for a life of service and costs approximately $50,000 to raise, train, place and support each dog, Stefan received Knox free of charge. “Canine Companions is there for me anytime I have questions or need support. They are committed to Knox and me, and want us to excel as a working team,” says Stefan. “Knox is an absolutely amazing service dog.”

To those who have experienced similar trials, Stefan says, “There is a future down the road. Going through your struggles will make you a better and stronger person.” Thanks in part to Knox, Stefan keeps moving forward.