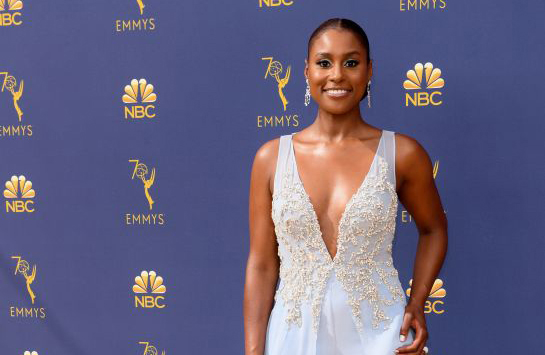 Fashion week has come and gone, at least in NYC and now awards season is here.

But what I saw the other night on the Emmy’s red carpet wasn’t exactly too hot or slayed in any way; just my opinion. I did like some of the fashions but I didn’t like a vast majority of them. I found so many of their choices to not be flattering for their figure, off trend, dated and quite frankly just downright ugly……just my opinion.

But just like in the past there were just a few designs that I absolutely loved, such as Issa Rae’s from HBO’s “Insecure”. It was a custom made sky blue jumpsuit from Vera Wang that took over 100 hours and 3,000 crystals to make. I found the design extremely classy, sophisticated and quite elegant, but what else would you expect from Vera Wang?!

I found the outfit to be incredibly classic, perhaps something the great fashion designer Edith Head would have created?

Another look that was a stunning to me was Kristen Bell, the design was from Solace London, apparently not a brand that’s on the red carpet often but that will probably change now. I think the look could have used some jewelry adornment though perhaps some black pearls or onyx jewelry but what do I know?

Click on the link below to see more looks from the red carpet:
2018 Emmy Awards Fashions

So, what did you think of the red carpet looks from the 2018 Emmy’s?
BTW, if you watched the Emmy Awards, did you also see that spontaneous wedding proposal……SO romantic!

Follow me on Twitter@VetFashionista for your chance to win great prizes!