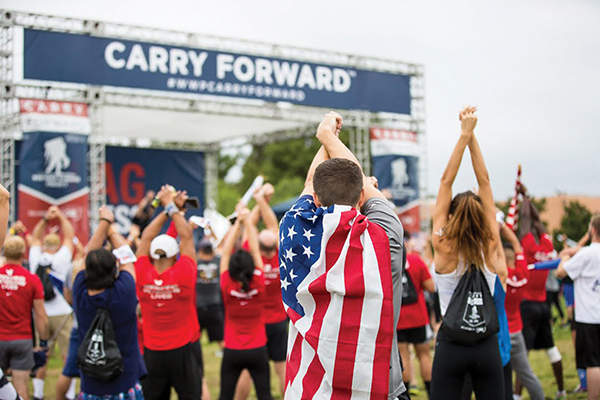 Americans are known as people who come together to honor those who have made the ultimate sacrifice, those who are wounded in service, and those who continue to serve.

Wounded Warrior Project® (WWP) ensures the bravest among us are honored, empowered, and engaged with their communities and the grateful Americans they served. WWP’s Carry Forward® 5K was born out of respect for legacies of sacrifice, honor, and service.

Carry Forward is a powerful, one-of-a-kind event where veterans’ supporters can take action and put WWP’s mission in motion. 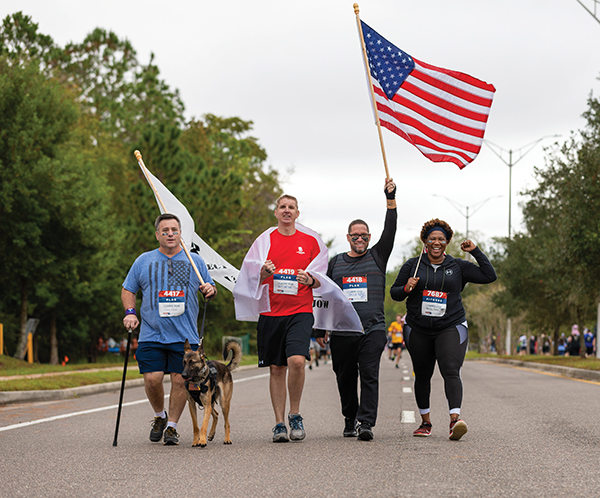 What makes Carry Forward unique is how you choose to support veterans: you can carry a flag to show your patriotism; carry a weight to represent the responsibilities veterans bear while serving our country; or carry another person to symbolize one warrior carrying another in their time of need.

No matter what you choose, every step empowers wounded warriors as they take on their next mission.

In 2018, more than 5,200 people registered and thousands more supported the launch of Carry Forward in three host cities and nationwide through the Carry Forward Virtual 5K. 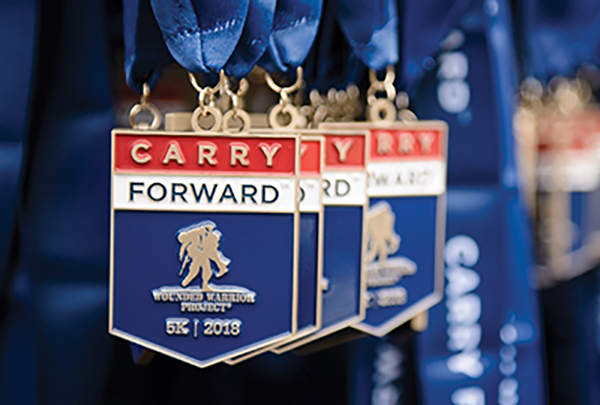 Why Carry Forward?
Kenny Angelini is both a warrior and a teammate at WWP. He served in the Army until 2007, was injured, and found new ways to serve – first in law enforcement and now at WWP, helping other veterans navigate benefits, VA health care, and education awards.

When Kenny put on a participant’s bib to walk Carry Forward Nashville last year with his service dog, Ranger, he was walking in memory of someone close to him.
“I lost a dear friend on April 12, 2005,” Kenny said. “His name was Manuel Lopez III – we went through boot camp together, and we spent time together while serving in the Army.”

Manuel’s Humvee was struck by a rocket-propelled grenade while he was on street patrol in Baghdad, Iraq. He was 20 years old. In addition to his parents and friends, he left behind his wife and infant daughter.

Kenny’s service dog, Ranger, is named in honor of an Army Ranger who was killed in combat. Kenny said he’s thankful to the organization that trained the dog and to the Gold Star mom who carried on her son’s legacy with the dog’s name. 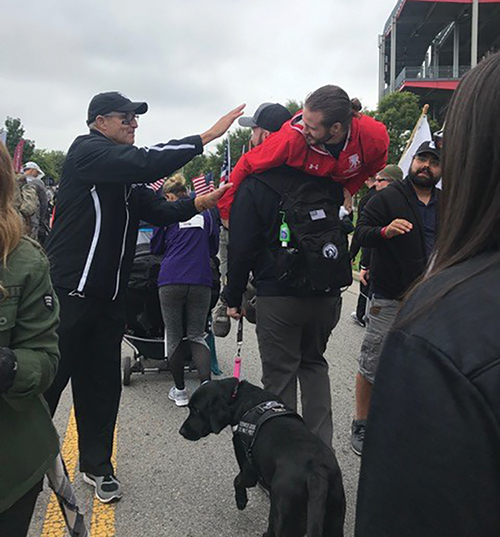 “Ranger actually helped me get through the 5K,” Kenny said. “I had not done a 5K or any distance walk or run since about 2005.”

Kenny embraced the spirit of community strength at Carry Forward.

“It became a team thing, sort of a collective milestone. It wasn’t a race, but a journey together. No one was left behind; everyone helped each other get to the finish line. It was amazing to see people who haven’t done this type of activity in a while come together and help each other. I want to see Carry Forward grow and turn into something even bigger.”

When an injured soldier came home, mom “ went to war”
When Mary Tallouzi’s son Daniel came back from Iraq with a catastrophic brain injury, Mary says she “went to war.” She was by his side day and night advocating for his care for the next two and a half years.

He was moved from hospital to hospital to rehab facilities – always with his mother by his side. She quit her job while forgoing income and medical benefits to be with her son. After he passed in 2009, Mary became an advocate and spokesperson for injured veterans.

“Most people think about a spouse and children as survivors,” Mary said. “But a soldier likely had parents, too, as survivors.”

Mary and fellow caregiver and spokesperson Jennifer Mackinday started a virtual squad for moms all over the U.S. who are survivors or caregivers of an injured veteran. The group is called Wounded Warrior Moms Across America. Its members communicate via text and social media to encourage each other to train for Carry Forward. This is a great example of a powerful and virtual Carry Forward event.

Mary Tallouzi, from Albuquerque, NM, organized a virtual Carry Forward 5K squad for moms all over the U.S. who are survivors or caregivers of an injured veteran. The group is called Wounded Warrior Moms Across America. Its members communicate via text and social media to encourage each other to train for Carry Forward. Anyone can form a virtual squad and participate from anywhere in the globe.

“For many people, it’s hard enough to commit to fitness, especially if you’re busy caring for a loved one,” Jennifer said. “In a team, we strive to reach our fitness goals and exchange notes about our challenges as caregivers.”

Jennifer quit her career to take care of her injured brother, James Smith, who was hurt in an IED blast in Mosul, Iraq. James has regained some independence. His nephew – Jennifer’s son Grant – is also a veteran.

“Mothers care for us when we’re hurting, and they ask for nothing in return,” Jennifer reflects. “It has really helped me to connect with other caregivers through Wounded Warrior Project. Other moms need to know that they don’t have to do it alone.”

Carry Forward helps fuel programs that give warriors and caregivers access to independence programs, mental health services, physical health and wellness education, and other support. Warriors never pay a penny for these programs – because they paid their dues on the battlefield.

The free services WWP offers are only possible due to the selfless and generous support of people who want to give back to veterans who have given so much.

Carry Forward not only helps support warriors and their families, it also brings the community together for a common cause. It bridges the gap between veterans and their community and creates more awareness of warriors’ needs.

See ways to get involved and help injured veterans at https://wwp.news/GiveBack.

Carry Forward 5K helps fuel programs that give warriors and caregivers access to independence programs, mental health services, physical health and wellness education, and other support. Warriors never pay a penny for WWP programs – because they paid their dues on the battlefield. 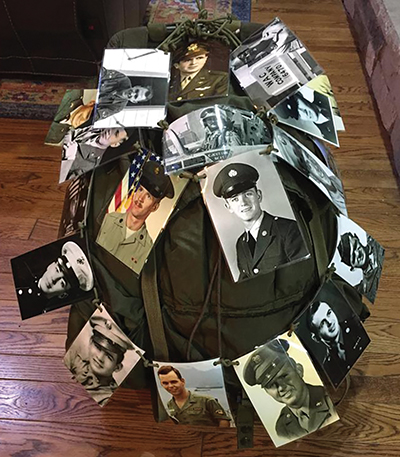 Carry Forward 5K participants choose to honor those who have made the ultimate sacrifice, those who are wounded in service, and those who continue to serve. Mitch Green, an army veteran from Malden, MO, honors his family’s legacy of sacrifice, honor, and service carrying a ruck sack with photos of grandfathers, uncles, cousins and friends who served.

Virtual Carry Forward 5K – you can participate from anywhere through Dec. 15.

In addition to four host cities, virtual runs or walks are held to honor wounded warriors and their sacrifices while changing their lives for the better.

About the Author
Gary Corless is chief development officer for Wounded Warrior Project. He leads Warrior Support, which includes resource development, communications, and marketing. Gary also oversees the promotion and protection of the organization’s mission, vision, and purpose.