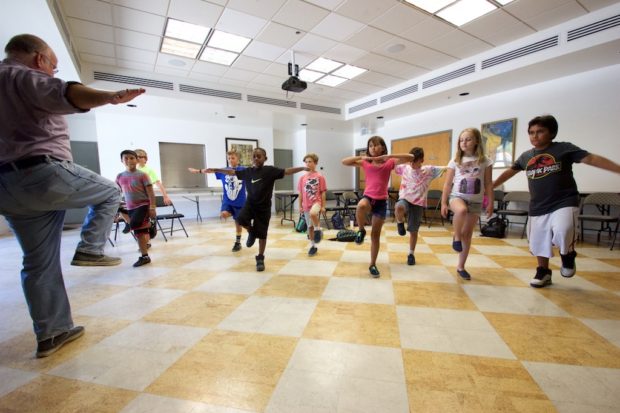 Enriching the Lives of Military and Veterans

SAN DIEGO, CA –Thanks to a 2-year grant from The James Irvine Foundation, Cygnet Theatre has been able to design and implement an impactful, theatre-based program that has found great success in reaching military personnel, families and veterans. The goal was to develop programs to increase participation and engagement and the results were two-fold: A series of workshops based on theatre activities and games; and a CYGNET SERVES touring production that brought theatre directly to area facilities. To date, over 74 workshops and 13 performances have been held in locations such as Navy Base San Diego, Veteran’s Museum, Armed Services YMCA, Operation Homefront, Serra High School, PATH, The Aspire Center and Veteran’s Village.

CYGNET SERVES began with a three month intensive “listening tour” which included interviews with existing area service organizations. “With over 100,000 active military and 200,000 veterans living in our area, we wanted to find out what type of programs would be most meaningful,” explained program coordinator Taylor Wycoff.

The workshops are led by actor and teaching artist Tim West, who “grew up to the sound of reveille.” A Cygnet Theatre Resident Artist and child of a Naval aviator, he understands the responsibilities and challenges of military families and veterans. “We work with them using the theatre tools of creative expression and improv to help them explore their emotions and it can often be extremely therapeutic.”

One of the extraordinary outcomes has been the valuable partnerships that have been established throughout the community. Currently, Cygnet Theatre is the only arts group that is a member of the San Diego Military Family Collaborative and has built meaningful relationships with The Aspire Center, Armed Service YMCA, PATH (People Assisting the Homeless), Operation Homefront and Veteran’s Village. “Our hope is that these relationships continue past the life of the grant,” said Wycoff.

On site performances have included “Walking in the Shadows of August Wilson,” written by TJ Johnson and “A Christmas Carol: Abridged.” This July, CYGNET SERVES will present the premiere of “Supers,” an original work with Liz Silverman that mirrors some of the challenges kids face with deployed parents. Upcoming dates are:

The next workshop called Camp Hero is set for July 10 and focuses on kids aged 10-15. It will be held at a location yet to be announced.

Additional programs under the Cygnet Serves umbrella include Tickets for Troops, which provides complimentary tickets to military families to see A Christmas Carol through corporate and individual donations. Additionally through the Blue Star Theatre program, military are offered deeply discounted tickets to all productions.

LogoCygnet Theatre Company produces a year-round season of professional Off-Broadway-style theatre as well as thought-provoking and engaging educational programming. Cygnet is committed to maintaining high standards of artistic and fiscal integrity, and serves more than 40,000 patrons annually from San Diego and beyond. Cygnet performs its mainstage productions at the state-of-the-art theatre in Old Town San Diego State Historic Park. An active member of the San Diego community, Cygnet has outreach programs serving tens of thousands of students and community members annually. For more information, visit www.cygnettheatre.com.

CYGNET THEATRE MISSION STATEMENT
Believing in the power of theatre to startle the soul, ignite debate and embrace the diversity of the community it serves, Cygnet Theatre Company is fearlessly committed to the dissection, examination and celebration of the human story through the medium of live theatre.