Christmas came early this year for Navy veteran Joseph Lightwies, whose present was getting off the cold streets and into a home.

Often, a complex chain of events lead a veteran into homelessness. Service-related health conditions can result in unemployment that potentially invites substance abuse issues and financial or legal struggles, ultimately leaving the veteran unable to afford housing and creating a difficult cycle to break.

However, a single act can be the catalyst in a chain reaction that puts a veteran back on track. Lightwies was homeless for decades, but connecting with Joe Kauffman, a DAV (Disabled American Veterans) professional veterans’ benefits advocate, proved to be the spark that changed his life for the better.

Lightwies sought help through the Philadelphia DAV National Service Office for the status of an appeal after another veteran told him about the organization’s claims services.

“Once I realized DAV was going to try to help me, I decided to become a member, and I’ve been one ever since,” said Lightwies, who was discharged from the Navy in 1968. Following his military career and until his health forced him into retirement, Lightwies had been working for many years as a carpenter.

At the veteran’s request, Kauffman was able to transfer power-of-attorney over to DAV and informed Lightwies that the appeal was pending, based on a remand with the Board of Veterans’ Appeals, and until that was completed, a decision would not be made.

Three months later, Lightwies reached out to Kauffman again and revealed that he was sleeping in his car. Recognizing the severity of the veteran’s living conditions, Kauffman immediately jumped into action and connected him with the homeless outreach coordinator at the local VA medical center. Kauffman had the staff fax him confirmation of Lightwies’ housing situation, which expedited the appeal based on VA policy for prioritizing claims processing for homeless veterans.

“When someone has been struggling as much as Joseph was, you do whatever you can to help the veteran receive a favorable outcome as quickly as possible,” said Kauffman, a Marine Corps veteran. “Finding Joseph a place to live and helping him get back on his feet was critical.”

Kauffman, who deployed twice to Iraq in service, joined DAV as a benefits advocate as soon as he learned about the organization’s mission.

“I knew right away it was something I wanted to do. It just felt right to help other veterans,” he said.

The appointment was scheduled for July, and less than a month later, Lightwies had a decision in hand, granting a service connection for post-traumatic stress with major depressive disorder.

The lump-sum, retroactive award meant Lightwies no longer needed to worry about where he would find his next meal. He could focus on working with the VA to secure housing, a benefit the veteran was unaware he was eligible for before Kauffman informed him.

“I’m happy anytime I can help veterans, but in Joseph’s case, I felt so incredibly relieved when this decision came through because I knew it would change his life,” said Kauffman. “He has a source of income now—that he earned through service—to keep him off the streets and a good perspective on life and a positive attitude to keep him successful.

“I became a [veterans advocate] so I could help veterans like Joseph,” added Kauffman.

“Every DAV benefits advocate has been on the other side of the table going through the claims process themselves. They understand firsthand the difficulties that can be encountered during appeals, and they work tirelessly to help their fellow veterans receive the benefits they earned,” said National Service Director Jim Marszalek. “When there is an absolute sense of urgency—like cases with extenuating circumstances like Joseph’s—we can ensure the claim is processed expeditiously.”

“No one who served our country should be huddled under a bridge, in a shelter or camped out in their car,” said DAV Washington Headquarters Executive Director Garry Augustine. “I am proud of the work DAV is doing and the partnerships we have forged through the public and private sector to fight this national tragedy.”

In January, with assistance from the VA, Lightwies picked up the keys to his new home.

“DAV has literally changed my life,” said Lightwies. “Joe was there for me when it mattered most. I would not be here if it wasn’t for him and DAV.”

A video to this story is available here. 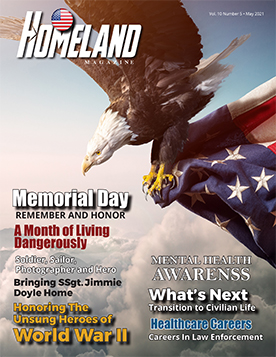