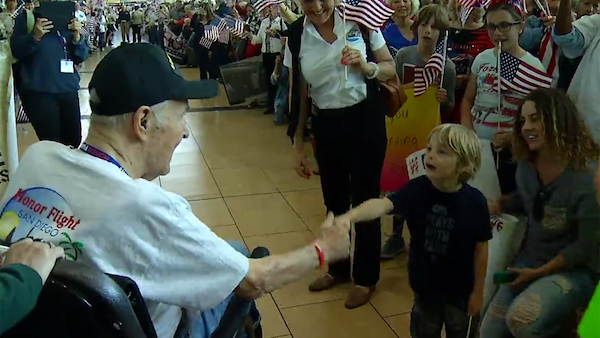 SAN DIEGO – On Sunday, May 6, Honor Flight San Diego will arrive at San Diego International Airport with 82 veterans returning from Washington, D.C. The veterans will have spent Saturday visiting memorials dedicated to their service and sacrifice.

The flight will arrive at 2:30 p.m. at Terminal 2 and guests can greet veterans at baggage claim. Attendees are reminded to allow plenty of time to park in Terminal 2 parking off McCain Road and to walk to the terminal. Golf cart shuttles will be available and the parking is free to public. Approximately 1,000 people are expected to attend the homecoming, including active duty military who “man the rails” and salute each veteran as he or she arrive.

The “Tour of Honor” flight will have 82 veterans from every branch of service; 55 WWII veterans and 27 Korea era veterans including three female veterans. Among the veterans are former Prisoners of War, Purple Heart and Bronze Star recipients and four Marines who are known as the “Chosin Few” who survived the Battle of the Chosin Reservoir. The oldest veteran is 99 years old and the youngest is 81 years old. “This is the trip of a lifetime for these senior veterans. They are going to see how grateful our nation is for their service and how much we all want to thank them,” said Julie Brightwell, chairman of Honor Flight San Diego. “This homecoming is special because many of our WWII and Korea veterans did not get this welcome home when they returned from war.”

The veterans will stop at Arlington National Cemetery and witness changing of the guard ceremony and female veterans will tour the Women in Military Service for America National Memorial and have a special recognition ceremony. Honor Flight San Diego has flown over 1,100 veterans from Southern California since 2010. The flight is completely funded through donations to Honor Flight San Diego. The veteran’s trip costs approximately $2,500 for three-day experience and due to fundraising and donations the veteran accrues no expense for the trip. When funded, the flight occurs two times each year – typically in the spring and fall. Priority is given to the most senior veterans, currently World War II veterans, and to veterans who have terminal medical conditions.

Honor Flight San Diego was founded in 2010 by Dave Smith after he travelled as a guardian with his father, Art Smith, a USMC veteran who served during WWII. Smith was so impacted by the opportunity to honor WWII heroes that he told the national chairman that he would like to volunteer at the San Diego hub. Learning there was no hub, he and his friends set out to create one.

For more information about Honor Flight San Diego or to donate to the organization, please visit: www.honorflightsandiego.org.

About Honor Flight San Diego:
Honor Flight San Diego (HFSD) is a 501(c)3, nonprofit organization dedicated to escorting San Diego county Veterans to Washington, D.C. to visit and reflect at the memorials dedicated to their service and sacrifice. HFSD is a branch of the nationwide Honor Flight Network which consists of over 130 independent “hubs” across America. Veterans fly free thanks to the monies donated by individuals, foundations, associations, business owners and corporations who wish to recognize their contributions and thank them for their service and sacrifice to the United States and its citizens. More information about Honor Flight San Diego can be found at www.honorflightsandiego.org, or follow us on Facebook (facebook.com/honorflightsandiego) or Twitter @HFSanDiego.

Loyal Source Partners with the Independence...