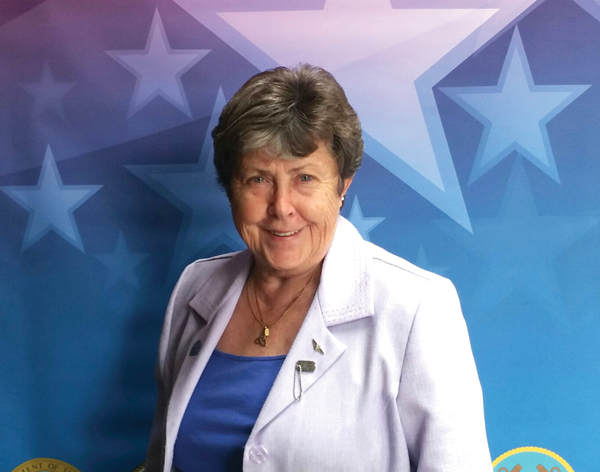 Retired Air Force nurse Linda Schwartz is among 15 women selected as 2018 Women’s History Honorees by the National Women’s History Project. Recognized under the theme Nevertheless She Persisted: Women Fighting All Forms of Discrimination Against Women, Schwartz overcame a military injury to become one of the nation’s leading veterans’ advocates focusing especially on women vets.

Linda Schwartz began her military career in 1967, right out of nursing school, she enlisted in the Air Force to serve in the Vietnam War. Military nurses regularly worked round the clock and often saw more death and dying than combat soldiers. The VA now estimate that nearly 50% of women who served in the Vietnam War will suffer PTSD sometime in their life, however, for decades the diagnosis of PTSD was not open to nurses or women.

After Vietnam, Schwartz trained to be a flight nurse and served several years in the USAF command post in Europe. In the 80s she transitioned to the reserves and joined the 69th Air Evac Squadron out of McGuire Air Force Base. It was while serving with this unit that Schwartz was in the 1983 aircraft accident that would end her military career. While flying at 30,000 feet one of the doors blew off her plane and Schwartz suffered a blast concussion causing stroke-like symptoms and leaving her paralyzed on her left side. Suddenly an unemployable vet with no health insurance, Schwartz turned to the VA for help.

As a nurse, Schwartz was shocked by the VA’s pervasive attitude of neglect toward women vets (inadequate facilities, lack of privacy, and physicals that didn’t include breast or gynecological exams). Told by doctors to go home and give up nursing, Schwartz refused to give up on her recovery or the VA. After completing both a Masters at the Yale School of Nursing and Doctorate in Public Health from the Yale School of Medicine, she turned her attention to veterans’ advocacy.

Schwartz took her fight for women vets to Congress where she has testified more than 24 times. In her first testimony, she openly contradicted two woman generals who had just attested to the VA being well equipped to serve women (noting the canteens offered women’s underwear and cosmetics). She spearheaded legislative efforts to authorize VA’s “Center for Women Veterans, served as Chair of VA’s Advisory Committee on Women Veterans, and on the board of the Vietnam Women’s Memorial

Schwartz served as Connecticut Commissioner of Veterans Affairs from 2003-2014. Under her tenure a new state-of-the-art VA hospital opened and programs for women and homeless vets were improved. In 2013 President Obama nominated Schwartz to be Assistant Secretary of Veterans Affairs for Policy and Planning where she continued to fight for issues such as suicide prevention and ending military sexual assault.

Now back home in CT, Linda Schwartz is still fighting for veterans. She helped launch the “Have You Ever Served in the Military?” campaign to better equip non-VA health providers to serve the complex medical needs of veterans. She also chairs the steering committee of an ongoing National Vietnam Veteran Mortality Study through the VA.

Women in the Military: Rising to the Challenge
When Linda Schwartz first enlisted, service women could not be married, pregnant, or parenting. 260,000 women served in the U.S. military during the Vietnam War, accounting for only 2% of the total force. But when the war ended in 1973, the military returned to an all-volunteer force and the share of women service members has steadily risen ever since. In 2013 the ban on women in combat roles ended, opening up more than 250,000 jobs to service women.

Women now comprise 16% of all active duty military personnel, 19% of active reserve personnel, and 25% of all military academy cadets and midshipmen. Since 9/11, more than 300,000 women have deployed to Iraq & Afghanistan. There are 2.2 million women veterans nationwide (out of a total 22 million).

Service women and men face many of the same challenges; family strain, PTSD, and difficulty finding work after leaving the service. But women face unique challenges too. Nearly 25% of women in the military report being sexually assaulted by a coworker (men are significantly less likely to experience such trauma). Service women also often place extra pressure on themselves to overcome gender norms, fighting to prove that they are just as strong and capable as their male colleagues. Despite these challenges, it is a testament to service women’s strength and resilience that all formal ceilings to their success have been eliminated.

Linda Schwartz and other 2018 NWHP honorees will be celebrated at a luncheon on March 24, 2018 in Washington DC. Visit nwhp.org to purchase tickets and learn more.

Past Military Women Honored by the National Women’s History Project
• Iraq War veteran Tammy Duckworth was the first female double amputee from the war; she went on to serve as Assistant Secretary for Public and Intergovernmental Affairs for the U.S. Department of Veterans Affairs and is now the Junior Senator from Illinois.
• Oveta Culp Hobby was Director of the Women’s Army Corps (WACs) in World War II.
• Dorothy C. Stratton was Director of the SPARS (Coast Guard Women’s Reserve) in World War II.
• Brigadier General Wilma Vaught was the Air Force’s first female general and was instrumental in the creation of the Women in Military Service for America Memorial.
• Brigadier General Rebecca Halstead was the first female graduate of West Point to become a general officer.