From PTSD and Sniper Fire, to Dogs That Heal 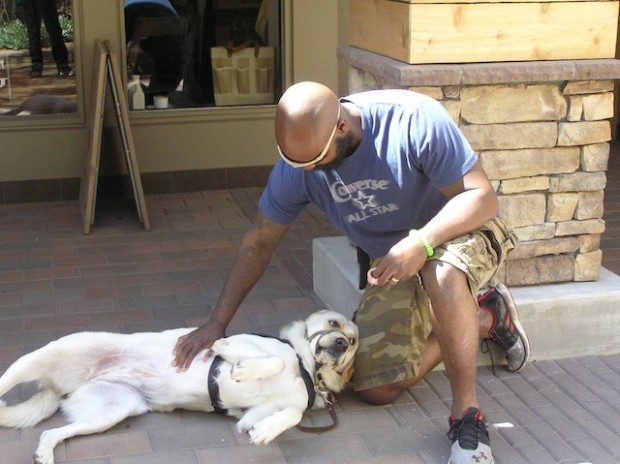 From PTSD and Sniper Fire, to Dogs That Heal
By Judy Keene

For our military men and women, post-traumatic stress disorder (PTSD) can include constant fear of sniper fire and being killed in a doorway, in a crowd, in the dark, or anywhere with people. Sudden flashbacks and night terrors can disorient and put the warrior instantly back in the bomb zone or crisis situation.

The overwhelming sense of fear and anxiety puts 99.99% of people with severe PTSD into isolation, rarely leaving their homes, and can often lead to suicide. The story of Eddie Ray Routh who suffers from PTSD (and shot and killed “American Sniper” Navy Seal Chris Kyle in 2013 at a Texas shooting range) is extremely rare.

Next Step Service Dogs in San Diego County was privileged to train rescue dog Sasha to be a service dog for Tacoma Parris, a former Marine, who was in boot camp when 9/11 hit and spent 12 years and 5 deployments serving as an American warrior in Iraq, Kuwait, and Afghanistan.

“ I loved my job in the infantry. I didn’t love killing people. I loved going with good people to bad places, and the people to my left and to my right were the best people I ever met. My biggest problem has been hypervigilance, feeling in every waking moment that I am still in Iraq, wanting to be there, missing being there, walking down the street with my left hand positioned for a rifle. When anxious or hearing an unexpected sound, I pat my thigh, feeling for the pistol that should be there. “

These Marines are trained to shake hands with the right hand but be prepared to kill with the left hand. The natural result of this life is hypervigilance, constant looking for exits, constant need to protect family and self from random violence, a constant evaluation of how many men you can defeat at a moment’s notice if threatened.

Seeking to reduce the resulting severe anxiety in public settings but uncertain if he even wanted a service dog, Tacoma attended a Next Step Service Dogs training session where a big Labrador mix named Sasha laid on his leg, making him feel calm, the best calm of his entire life. Within two months of training with and living with Sasha, Tacoma felt a 100 times better and eliminated the medications that made him feel like an exhausted zombie. And he is now able to seek a job with the border patrol, a job that he is sure to love.

So what does Sasha do exactly to help Tacoma? Sasha and Tacoma developed a bond, a silent, totally trusting communication, that happened quickly. Sasha uses body language, a mere nudge, pressure on his leg, resting on his feet, licking his face, to distract and return Tacoma to here and now.

If his anxiety escalates while watching the news, Sasha is likely to block his view of the TV, stare at him, or pace in front him, saying “cut it out!” Other times she will get in his face and wiggle her eyebrows to make him laugh. And if she becomes anxious, Tacoma is quick to find the source; if she is calm, he knows that his world is safe and he has no worries. Just being in Starbucks used to be a nightmare; now Sasha just circles around Tacoma creating a “safety bubble” of space while he waits in line for coffee, without fear. This is huge.

“I don’t talk in my sleep any more, looking for snipers. I don’t have to use medications that make me exhausted and incoherent, and barely able to hold a job. And I no longer have constant thoughts of death and destruction. My wife and daughters say I smile a lot more, and are glad that I can go places with them now – not everywhere but still many more than before. I am learning to be more patient and more social, and take time to educate the public about Sasha and service dog work. “