THE PLAYERS Championship – supporting military and their families 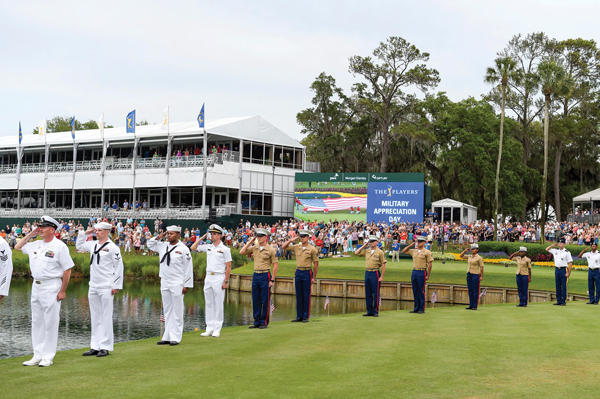 THE PLAYERS Championship has a longstanding tradition of supporting military and their families. Throughout the week, the tournament hosts several events all with the goal of saying ‘thank you’ to those who selflessly serve. Each year, fans count down the days until Tuesday of tournament week, fondly known as Military Appreciation Day, which kicks off the week with a show of patriotism and support for the United States military. This is a unique way for our men and women in uniform and their families to be recognized for their service and sacrifice to our country.

As a golf fanatic, Michael Robichaud always looks forward to attending THE PLAYERS Championship as both a spectator and a volunteer. But it wasn’t until last year that his trips to TPC Sawgrass became especially unique. In 2016, Robichaud’s son, James, was deployed with the United States Air Force. Suddenly, Military Appreciation Day had an intimate sense of importance, as he was now honoring his son. Robichaud has many special golf memories between attending majors and meeting players, but none can top his experience while volunteering at THE PLAYERS Championship in May of 2017.

Robichaud is a tenured marshal during tournament week at the 15th hole of THE PLAYERS Stadium Course at TPC Sawgrass. Always eager to help where it’s needed, he didn’t give a second thought when a member of the tournament staff requested his assistance at the Patriots’ Outpost – a hospitality venue adjacent to 16 tee offering complimentary food, drink and shaded views of golf to military members and their families. Knowing the Outpost can receive larger than average crowds on Military Appreciation Day, Robichaud dutifully made his way to his new assignment where he was tasked with verifying all military IDs before allowing admittance to the Patriots’ Outpost. While greeting guests, he faced the opposite direction as a familiar face ventured out of the Outpost toward him. Robichaud remained distracted after agreeing to do an interview with a local news network about his experience volunteering. He was midway through an answer when he felt the presence of someone standing a little too close for comfort. After finishing his answer, he glanced to the side to see who had entered his personal space, and was shocked to discover his son, Airman James Robichaud had returned early from his months-long deployment in the Middle East. James, still in uniform, and his dad, still in shock, shared a long overdue embrace while surrounded by teary-eyed onlookers. Michael never finished his interview, but it’s safe to assume that moment is his new volunteer highlight at THE PLAYERS Championship .

Military Appreciation will be an on-going theme throughout THE PLAYERS Championship this year. See below for a full list of events.

• Operation Shower – Sunday, May 6th, 12:00 p.m. – 2:00 p.m.
The Patriots’ Outpost, 16th tee
THE PLAYERS Championship, along with Operation Shower, hosts a baby shower for new and expectant mothers as a way to bring joy to each of their families. Each of the moms is the spouse of a deployed service member, or a service member themselves. This is a unique opportunity for the moms to come together and celebrate with others going through a similar experience.

• Military Ticketing Offers – Tuesday, May 8th – Sunday, May 13th https://birdiesforthebrave2.sheerid.com/theplayers2018/
Active Duty, Military Retirees, Military Reserve, National Guard, and Military Spouses along with their dependents can receive complimentary tickets for each day of THE PLAYERS Championship.
Military Veterans may purchase up to two (2) discounted tickets ($15 Tuesday – Wednesday, $25 Thursday – Sunday) for each day of THE PLAYERS Championship.
Must show Department of Defense Issued ID or Photo ID along with ticket voucher

Loyal Source Partners with the Independence...