Tour of Honor – the final mission 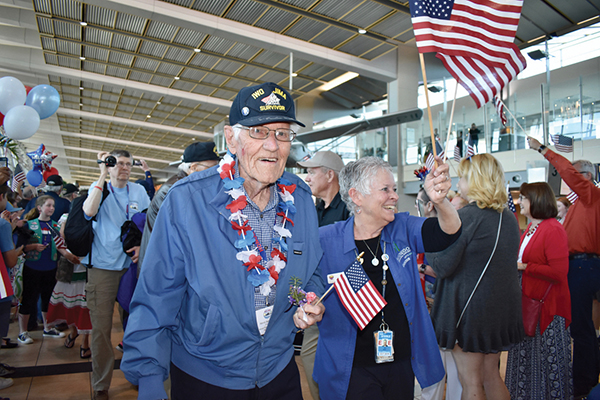 There are few times in a person’s life when they can say an event was “life-changing” but that is how many guardians feel about their experience on Honor Flight San Diego.

An able-bodied guardian is paired with a WWII or Korea War veteran to be their “battle buddy” for a three-day trip that is a weekend full of memories – for the guardian and the veteran.

Honor Flight San Diego returned from their May 2019 trip after taking 83 veterans on their “final mission”. The Tour of Honor trip was provided by Honor Flight San Diego, a local non-profit organization that takes the most senior veterans and veterans who have terminal illnesses to Washington, D.C. to visit the memorials dedicated to their service and sacrifice.

The trip is more than just visiting memorials – it is also a time for these veterans to make new friends, share their stories and build that military camaraderie they may have missed for the last 75+ years. For three straight days, they are thanked and appreciated for their military service.

Prior ABC San Diego military reporter Bob Lawrence went on the trip as a guardian for Navy Korea War veteran Bill Ohler. “Seeing the memorials through their eyes was inspirational,” said Lawrence.

“But the impromptu thank you’s to the veterans for their service was the most memorable.”

It all starts at zero-dark-thirty when the veterans arrive to the airport and are greeted at the curb by Honor Flight volunteers to help them with their bags and push them in a wheelchair to check-in where they are greeted with a hug by their team leaders. And that starts the 72-hour whirlwind trip.

They are flown by charter aircraft to Baltimore, MD and on this leg of the trip they receive a big surprise – Mail Call. They are given letters, cards and pictures made by local scout troops, elementary schools and organizations. But the ones that are most special are those from their family.

Each veteran receives a package of mail and they open every envelope and handle every letter and picture with great care.

When the flight lands at BWI, the veterans are greeted by the airport’s fire department with a water salute that is normally reserved for retiring pilots. As they exit the plane, there is patriotic music playing and active duty, veterans and other travelers welcome them to Baltimore.

As the veterans get through a gauntlet of well-wishers, they say that they have never felt so special.

Little do they know more is coming.

The next day the veterans and guardians board charter buses and head to Washington, D.C. where they are escorted by local motorcycle groups and park police who part the sea of traffic.

One of the most impactful stops is at Arlington National Cemetery where they witness the Changing of the Guard ceremony. While the ceremony itself is silent, the guards salute the WWII vets who line the area by doing a quick scuff of their shoe heel on the pavement.

The women veterans stop at the Women in Military Service for America Memorial where they are greeted by retired Air Force BrigadierGeneral Wilma L. Vaught and are presented with certificates and entered into the memorial’s database. 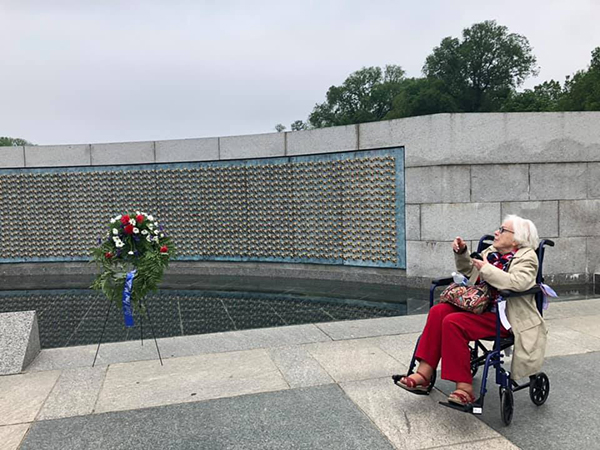 Throughout the day, they are honored, thanked for the service, given hugs and kisses and they reminisce about their time in the Air Force, Army, Coast Guard, Marine Corps and Navy.

The final surprise of the trip is the San Diego homecoming. The doors open to the plane and they can already hear the crowd cheering for them – but they don’t know it is for them. They get to the top of the escalator or the elevator and it is a sea of red, white and blue, American flags and 1000 people chanting – USA! USA! USA! 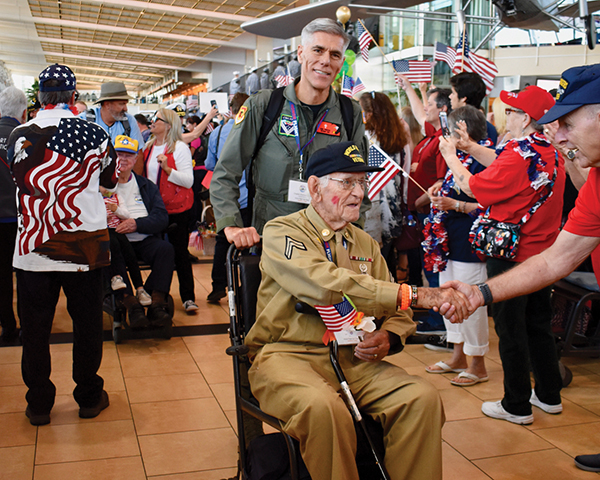 When they realize this is THEIR homecoming, it is hard to control the emotions, even for the most hardened of the military men and women.

On this last trip there was one veteran who got a different kind of homecoming. His name was Frank Manchel and he was 95 years old and served as a Technical Sergeant in the U.S. Army. Frank had just spent the weekend with two of his sons, his nephew, and his 92 year old WWII vet brother from Michigan, all coordinated through Honor Flight San Diego. Approximately 90 minutes before the flight landed in San Diego, Frank collapsed and passed away. 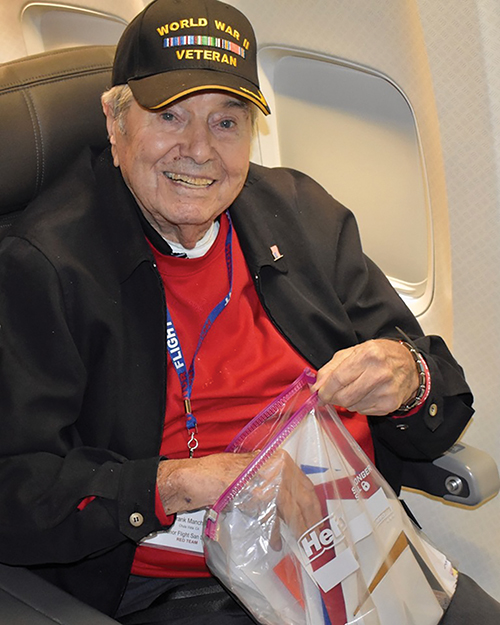 There were chaplain’s on the flight who said prayers for Frank and his family as everyone on the plane sang “God Bless America”. Frank’s WWII veteran ball cap was placed on his head and his body was draped in an American Flag. When he was removed from the plane, the firefighters, law enforcement and medical personnel assembled on the ground and delivered final salutes for this fallen hero. While other veterans were being cheered and hugged by their families, this was the homecoming Frank received.

Franks son, Bruce, was his guardian on the flight and said, “My father’s passing was the ending to the most amazing weekend, surrounded by his newest best friends. It was a beautiful ending to a beautiful life.”

Bruce remarked that his dad didn’t talk about the military very much this trip brought him out of his shell. His family believes that Frank was ready and that this was his final mission. They said that they could not have scripted a better ending for Frank.

This story went viral throughout the United States and overseas in the television and print media as well as social media; everyone who heard of this story left condolences for the family.

Due to generous donors, every veteran goes on the trip at no cost to them. If the organization can raise enough funding their next trip, it will be scheduled for
October 2019.

If you know a WWII veteran who has not been on their Tour of Honor, or if you would like to donate, please go to: www.honorflightsandiego.org. You can also follow the organization on Facebook @HonorFlightSanDiego. 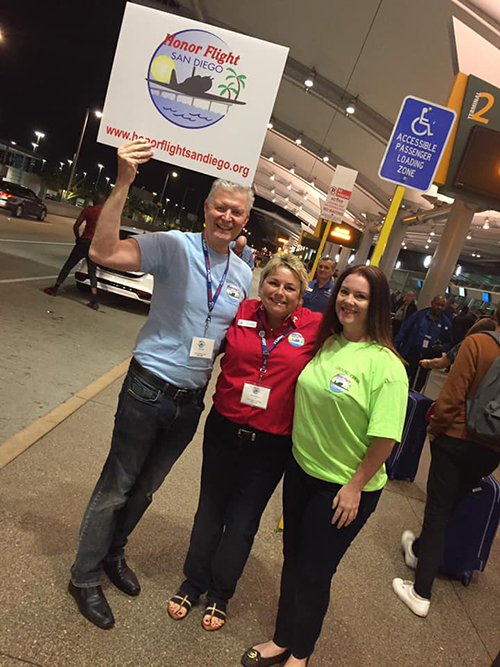