Memorial Day: A Time for Heroes 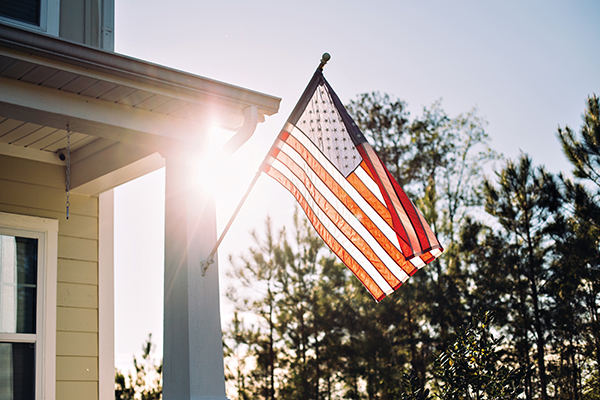 A teenager learns the importance of war veterans in this inspiring story.

I leaned against an oak at the side of the road, wishing I were invisible, keeping my distance from my parents on their lawn chairs and my younger siblings scampering about.

I hoped none of my friends saw me there. God forbid they caught me waving one of the small American flags Mom bought at Ben Franklin for a dime. At 16, I was too old and definitely too cool for our small town’s Memorial Day parade. I ought to be at the lake, I brooded. But, no, the all-day festivities were mandatory in my family.

A high school band marched by, the girl in sequins missing her baton as it tumbled from the sky. Firemen blasted sirens in their polished red trucks. The uniforms on the troop of World War II veterans looked too snug on more than one member.

Five black convertibles lumbered down the boulevard. The mayor was in the first, handing out programs. I didn’t need to look at one. I knew my uncle Bud’s name was printed on it, as it had been every year since he was killed in Italy. Our family’s war hero.

And I knew that perched on the backseat of one of the cars, waving and smiling, was Mama, my grandmother. She had a corsage on her lapel and a sign in gold embossed letters on the car door: “Gold Star Mother.”

I hid behind the tree so I wouldn’t have to meet her gaze. It wasn’t because I didn’t love her or appreciate her. She’d taught me how to sew, to call a strike in baseball. She made great cinnamon rolls, which we always ate after the parade.

What embarrassed me was all the attention she got for a son who had died 20 years earlier. With four other children and a dozen grandchildren, why linger over this one long-ago loss?

I peeked out from behind the oak just in time to see Mama wave and blow my family a kiss as the motorcade moved on. The purple ribbon on her hat fluttered in the breeze.

The rest of our Memorial Day ritual was equally scripted. No use trying to get out of it. I followed my family back to Mama’s house, where there was the usual baseball game in the backyard and the same old reminiscing about Uncle Bud in the kitchen.

Helping myself to a cinnamon roll, I retreated to the living room and plopped down on an armchair.

There I found myself staring at the Army photo of Bud on the bookcase. The uncle I’d never known. I must have looked at him a thousand times—so proud in his crested cap and knotted tie. His uniform was decorated with military emblems that I could never decode.

Funny, he was starting to look younger to me as I got older. Who were you, Uncle Bud? I nearly asked aloud.

I picked up the photo and turned it over. Yellowing tape held a prayer card that read: “Lloyd ‘Bud’ Heitzman, 1925-1944. A Great Hero.” Nineteen years old when he died, not much older than I was. But a great hero? How could you be a hero at 19?

The floorboards creaked behind me. I turned to see Mama coming in from the kitchen, wiping her hands on her apron.

I almost hid the photo because I didn’t want to listen to the same stories I’d heard year after year: “Your uncle Bud had this little rat-terrier named Jiggs. Good old Jiggs. How he loved that mutt! He wouldn’t go anywhere without Jiggs. He used to put him in the rumble seat of his Chevy coupe and drive all over town.

“Remember how hard Bud worked after we lost the farm? At haying season he worked all day, sunrise to sunset, baling for other farmers. Then he brought me all his wages. He’d say, ‘Mama, someday I’m going to buy you a brand-new farm. I promise.’ There wasn’t a better boy in the world!”

Sometimes I wondered about that boy dying alone in a muddy ditch in a foreign country he’d only read about. I thought of the scared kid who jumped out of a foxhole in front of an advancing enemy, only to be downed by a sniper. I couldn’t reconcile the image of the boy and his dog with that of the stalwart soldier.

Mama stood beside me for a while, looking at the photo. From outside came the sharp snap of an American flag flapping in the breeze and the voices of my cousins cheering my brother at bat. “Mama,” I asked, “what’s a hero?” Without a word she turned and walked down the hall to the back bedroom. I followed.

She opened a bureau drawer and took out a small metal box, then sank down onto the bed. 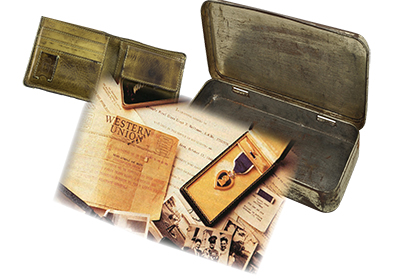 “These are Bud’s things,” she said. “They sent them to us after he died.” She opened the lid and handed me a telegram dated October 13, 1944. “The Secretary of State regrets to inform you that your son, Lloyd Heitzman, was killed in Italy.”

Your son! I imagined Mama reading that sentence for the first time. I didn’t know what I would have done if I’d gotten a telegram like that.

“Here’s Bud’s wallet,” she continued. Even after all those years, it was caked with dried mud. Inside was Bud’s driver’s license with the date of his sixteenth birthday. I compared it with the driver’s license I had just received.

A photo of Bud holding a little spotted dog fell out of the wallet. Jiggs. Bud looked so pleased with his mutt.

There were other photos in the wallet: a laughing Bud standing arm in arm with two buddies, photos of my mom and aunt and uncle, another of Mama waving. This was the home Uncle Bud took with him, I thought.

I could see him in a foxhole, taking out these snapshots to remind himself of how much he was loved and missed.

“Who’s this?” I asked, pointing to a shot of a pretty dark-haired girl. “Marie. Bud dated her in high school. He wanted to marry her when he came home.” A girlfriend? Marriage? How heartbreaking to have a life, plans and hopes for the future, so brutally snuffed out.

Sitting on the bed, Mema and I sifted through the treasures in the box: a gold watch that had never been wound again. A sympathy letter from President Roosevelt, and one from Bud’s commander. A medal shaped like a heart, trimmed with a purple ribbon, and at the very bottom, the deed to Mama’s house.

“Because Bud bought this house for me.” She explained how after his death, the U.S. government gave her 10 thousand dollars, and with it she built the house she was still living in.“He kept his promise all right,” Mama said in a quiet voice I’d never heard before.

For a long while the two of us sat there on the bed. Then we put the wallet, the medal, the letters, the watch, the photos and the deed back into the metal box.

I finally understood why it was so important for Mama—and me—to remember Uncle Bud on this day.
If he’d lived longer he might have built that house for Mama or married his high-school girlfriend. There might have been children and grandchildren to remember him by.

As it was, there was only that box, the name in the program and the reminiscing around the kitchen table.
“I guess he was a hero because he gave everything for what he believed,” I said carefully.

“Yes, child,” Mama replied, wiping a tear with the back of her hand. “Don’t ever forget that.”

I haven’t. Even today with Mama gone, my husband and I take our lawn chairs to the tree-shaded boulevard on Memorial Day and give our daughters small American flags that I buy for a quarter at Ben Franklin.

I want them to remember that life isn’t just about getting what you want. Sometimes it involves giving up the things you love for what you love even more. That many men and women did the same for their country—that’s what I think when I see the parade pass by now. And if I close my eyes and imagine, I can still see Mama in her regal purple hat, honoring her son, a true American hero. 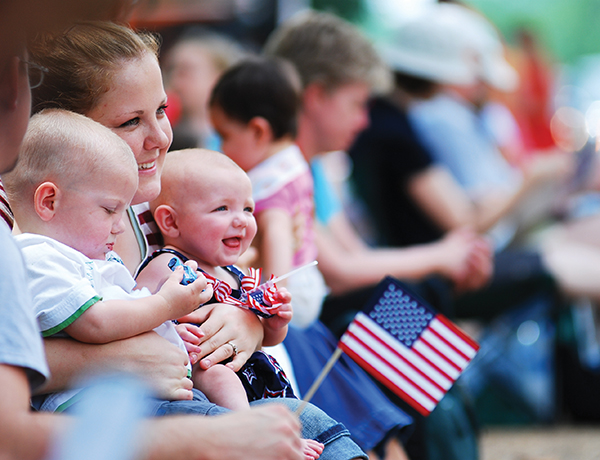