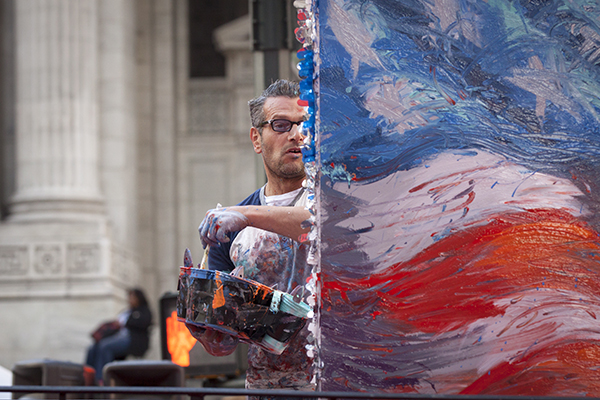 The number 22 sticks in artist Scott LoBaido’s mind like a painful embedded thorn. It’s not just the number, but rather, what it represents.

It’s been that way ever since that day four years ago, when Mr. LoBaido found out that 22 veterans a day commit suicide in the United States. That number, he says, is not only disgusting, but it is unacceptable.

So, the patriotic Staten Island, New York-based artist decided to do something about it to bring awareness to the tragic situation. He created a powerful ‘22’ sculpture that he is currently touring among the original 13 U.S. colonies, hence, the name of his “22-13” tour.

“It’s been about four years since I found out about the number 22 in my last tour,” said Mr. LoBaido, who was visiting veteran’s posts in all 50 states in 2015 and painting American flags on them when he discovered the grim reality of veteran suicides. “I went to every state and I found out about that number 22 and I wrote that number on the palm of my hand with a Sharpie.

It has been there ever since. 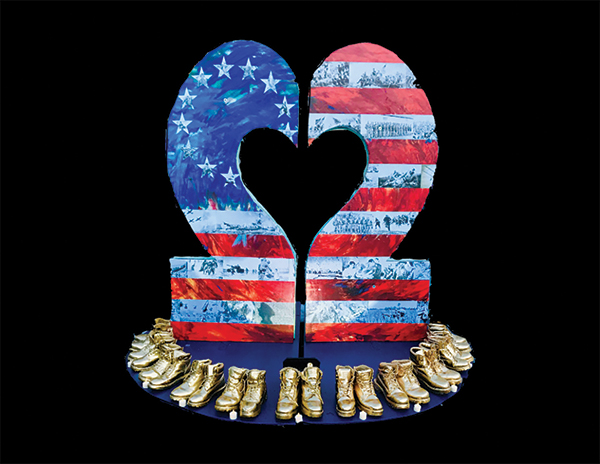 “That number is absolutely disgusting. I knew right then that I needed to bring attention to this issue.”

Mr. LoBaido’s ‘22’ sculpture depicts a pair of twos facing each other covered in an American flag design, in which the white stripes feature a collage of all the wars the United States has participated in. The opposing numbers create an empty heart between them.

The sculpture’s base features 22 pairs of empty boots, each lit up with battery-operated candles, and it is surrounded by 22 life-size figures lit up with LED lighting that represent the 22 veteran souls lost each day.

It is a powerful — and chilling — sight.

“I’ve see a lot of the pain first-hand. You can see guys sitting at the bar having a beer at the Legion and all of a sudden they start to cry. Taking care of our veterans is important and I think that’s the biggest reason I want to share my art.

A ‘calling’ to create patriotic art

Mr. LoBaido said that he found his calling for patriotic art while working in New York City.

“I’ve been an artist my entire life,” he said. “Back in the ’90s, I was invited to work at a gallery in big city New York and when I walked in there was an American flag on the floor and visitors were invited to wipe their feet on it. It was during a time when patriotism had taken a big dip in this country.

“I was completely dumbfounded by the great deal of hatred there was towards the American flag and all that is good in America. In the art world we have more rights than most people with the art that we create. It’s because of men and women who fought (in wars) that we have this flag – this right.”

Since then, Mr. LoBaido has completed three cross country state tours since 2006 painting flags across America to promote patriotism and celebrate veterans.

“A lot of people don’t realize it, but I never served in the military,” he said, ‘but it’s an honor to help celebrate those who did.”

Tour all about changing outcomes

The “22-13” Tour was particularly close to his heart, adding that it was an important creative mission.

“Each day 22 of our veterans die by their own hand,” Mr. LoBaido said. “Now it is time to help the injuries and pain in the minds of these heroes.

“Post-traumatic stress disorder is the number one issue. Many organizations are now taking notice, but not enough, fast enough. Some new data says the number (of veteran suicides per day) is 20, but that survey does not include all states. Be it 20 or 22, these numbers are horrendous.”

When it comes to creating patriotic art, Mr. LoBaido’s goals are:

— Invent new ways to portray Old Glory and promote the greatness of America through his vibrant paintings, sculptures and installation.

— Use art to unify a nation, especially in troubling times.

— Attract the attention of children to view the American flag on a contemporary, bold stage.

— Bring attention and awareness to the real celebrities of America, our heroes, our veterans.

The ultimate goal, for Mr. LoBaido, is not to get rich but to just make a difference.

“With my art, I’ve sought to make a difference in the world as a man and as an American,” 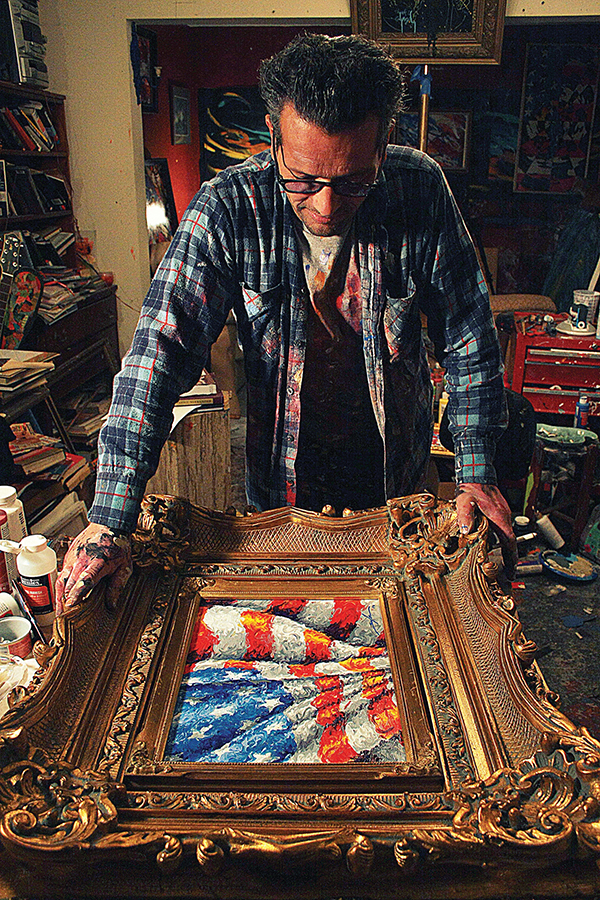 “Whether a Boomer, Gen-Xer, or Millennial, it’s easy in modern times to forget the origins of our prosperity and freedom. The wondrous and instant nature of our technology and culture can make it easy to forget how we got here.

“And so, I became fascinated with preserving the symbols of the countless brave Americans who stood, fought, marched and sacrificed so much for our livelihood.

I am no history scholar, but I sense in the basics of my being, preserving our past is the truest way to honor our future.”

The great thing about America is the fact that it can always be better, and our gift is that “we the people” have the freedom to make it better. Anyone who knows me knows I passionately advocate for the First Amendment. I encourage us all to passionately question, protest, express, assemble, and petition – but always, always be grateful that you can.

To commission Scott for original canvas paintings or murals in your state, please contact Scott directly at scott@scottlobaido.com

Get the latest on Scotts work at scottlobaido.com

Honoring the rich symbolism of this beautiful country and saluting the valiant efforts of our veterans.